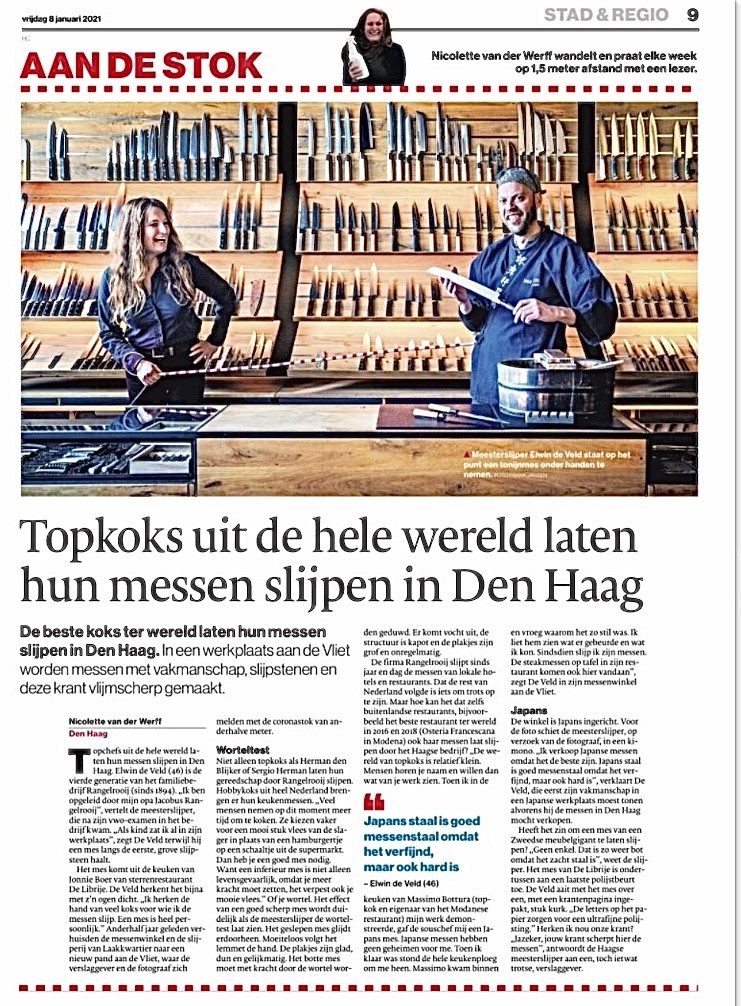 The best chefs in the world have their knives sharpened in The Hague: What is the secret of family business Rangelrooij?

The best chefs in the world have their knives sharpened in The Hague. Knives made by craftsmanship, sharpening stones and this newspaper create razor-sharp knives, all done in a workshop along the Vliet. This week we visited family business Rangelrooij for the weekly section ''Aan De Stok''.

Top chefs from all over the world have their knives sharpened in The Hague. Elwin de Veld (46) is the fourth generation of the family business Rangelrooij (since 1894). "I was trained by my grandfather Jacobus van Rangelrooij", says the master sharpener who came into the company after his pre-university education exam. "As a child I was already in his workshop," says De Veld as he runs a knife along the first, coarse, sharpening stone.

The knife comes from the kitchen of Johnnie Boer of star restaurant De Librije. De Veld almost recognizes it with his eyes closed. “I recognize the hand of many chefs for whom I sharpen the knives. A knife is very personal. "" Eighteen months ago, the knife shop and sharpening shop from Laakkwartier moved to a new building on the Vliet, where the reporter and the photographer report with the 1.5 meter corona stick.

Not only top chefs like Herman den Blijker or Sergio Herman have their tools sharpened by Rangelrooij. Hobby chefs from all over the Netherlands bring their kitchen knives there. “Many people are currently taking more time to cook. They choose a nice piece of meat from the butcher instead of a hamburger on a dish from the supermarket. Then you need a good knife. Because an dull knife is not only life-threatening, because you have to use more force, it also ruins your beautiful meat. "" Or your carrot.

The effect of a good sharp knife becomes clear when the master sharpener shows the carrot test. The sharpened blade slides through it. The blade follows effortlessly by hand. The slices are smooth, thin and even. The dull blade must be pushed with force through the root. Moisture comes out, the structure is broken and the slices are coarse and irregular.

The Rangelrooij company has been sharpening the knives of local hotels and restaurants for many years. That the rest of the Netherlands followed is something to be proud of. But how is it possible that even foreign restaurants, for example the best restaurant in the world in 2016 and 2018 (Osteria Francescana in Modena) also have their knives sharpened by Rangelrooij?

“The world of top chefs is relatively small. People hear your name and then want to see some of your work. When I demonstrated my work in the kitchen of Massimo Bottura (top chef and owner of the Modanese restaurant), the sous chef gave me a Japanese knife. Japanese knives hold no secrets from me. When I finished the whole kitchen crew was around me. Massimo came in and asked why it was so quiet. I showed him what was happening and what I could do. I've been sharpening his knives ever since. The steak knives on the table in his restaurant also come from here "," says De Veld in his knife shop on the Vliet.

The shop is decorated in a Japanese style. For the photo, the master sharpener, at the request of the photographer, shoots in a kimono. “I sell Japanese knives because they are the best. Japanese steel is good knife steel because it is refined, but also hard, "explains De Veld, who first had to show his craftsmanship in a Japanese workshop before he was allowed to sell the knives in The Hague.

Does it make sense to have a knife from a large Swedish furniture store sharpened? ,,None. That is in no time blunt again because it is softer steel, the sharpener knows. De Librije's knife is now ready for a final polishing. De Veld strokes a piece of cork with a newspaper page wrapped around it. "The letters on the paper provide an ultra-fine polish." "Do I recognize our newspaper? "Yes, your newspaper sharpens the knives here", the Hague master sharpener replies to a bit proud reporter.

(11 mei 2020)
The corona measures meant that many companies had to close their doors for a longer period of time. Now that the spread of the virus seems to be declining, the Netherlands is slowly reopening. RTL realizes that companies can use every little nudge to get back on track. With this in mind, RTL will offer enterprising Netherlands free advertising time from Monday 11 May via the initiative "The Netherlands will open again".

Rangelrooij has also made and sent a commercial, which has been on television several times. See below the result: