Every knifemaker in Japan has a story of their own, they have their own identity and their own philosophy on knife making. In my research for new knives, I decided to look for something truly traditionally handmade. I ended up at Fujiwara Teruyasu. A rarely seen model (it was already a few years ago...), but when I got my hands on one in my workshop, I found out how thin the blade was just behind the cutting edge. Reason enough to explore further. The Japanese traditional steel Fujiwara san uses is perfect for this way of finishing the blade. The nowadays iconic finger rest, makes a pinch grip feel like you have had the knife for years already. 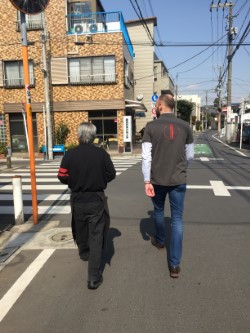 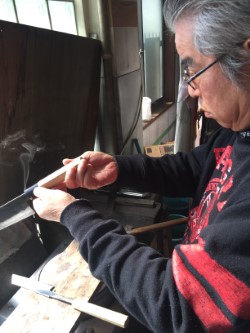 Kojiro Watanabe is one of the few master bladesmiths in Japan who chooses to start the knifemaking process with constructing 3 layered steel himself. Many knifemakers buy layered steel at their steel factory, but Fujiwara chooses differently. Three seperate layers of steel are bought and forged in a san mai construction ( two stainless layers on the outside with a core made out of Shirogami white #1 or Aogami super). The core steel is often seen with traditional Japanese models, but Fujiwara chooses to use these traditional steels for his more Western models. The advantage of using a sanmai constuction of three layers steel is explainable: the high carbon steel core is protected with a stainless steel on the outside and this way the knife will be having the same maintainance as a stainless steel. So no more hassle with oils or rust erasers. Knifemakers as Fujiwara prefer the superior traditional steels such as Shirogami and Aogami.

All his knives are thinned by hand on the Kaiten Toshi water stone, then finished with a micro bevel. Fujiwara knives are known for their thin blades, so this means they are perfect for cutting, but not to chop bones or frozen foods, the blade is fragile on the cutting edge and if force is used in an unappropiate way, this may harm the cutting edge.

In 2019 Fujiwara knives will celebrate their 150 years of craftmanship, nowadays run by president Kojiro san, who is the 4th generation owner of this family business. Forging still in a traditional and authentic way, similar to his ancesters, who where forging katana's, the Japanese swords. By improving this process, but maintain to traditional knifemaking, his knives are nowadays comparibly as sharp or even sharper, as swords in those days. Fujiwara is well known for its robuste knives and supurb finishing. Maybe not the flawless finish as you can expect in this range, but this inferior finish has a name in Japanese: wabi sabi. 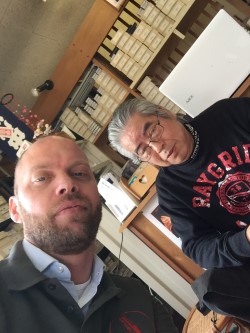