Shibata Takayuki, the owner of Kotetsu knives, takes us to the orogin of his knives. "Which needs does a knife have to meet?" One of the first questions during designing of a knife: "What does the user need?". The priority of his knives is a function in the kitchen, a knife has to excel with its cutting quality. From this point begins the design. The combination of the project and the function his philosophy describes as follows:

"Art over beauty", the art of cooking lays over the beauty of the knife, in other words the function of a knife lays above its aesthetics. A design of simplicity and clarity: a handle, a blade and a form, in combinantion with extreme sharpness. What follows: flexibility and pleasure during cutting on a daily basis.

He has always used a gyuto knife in his kitchen, but he thought the cutting edge was too round. Since he is a knife maker he thought to himself: I'm going to adjust that. A line that's a little less round, a sharp point, ideal in cutting vegetables, but also perfect for meat or fish.

The design was there, now it was time for a name: Kotetsu.

One of the first ones, wood combines with steel (Ironclad), assault ships of the Japanese army "the Kotetsu" didn't have a common design. A long stem combined with short stern: the design of the ship looks like a blade of Kotetsu. A radical idea for a ship, a progressive design, exceeding in its class, just like the knives of Shibata Takayuki: " Kotetsu knives". 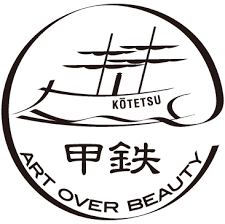 The Kotetsu knives are actually a steel clad: in other words a blade made out of 3 layers of steel. A core is of stainless powder steel SG2, with 2 layers of softer stainless steel on both sides. Through a process of attaching two outer softer layers, the extremely hard core of the powder steel (62HRC-63HRC) gets a good protection and to some extent a flexibility.

The blade characterizes itself by "thinness" and is polished roughly on both sides. As a result during cutting of the vegetables, the moisture floats more easily. The whole serie features sharp, thin points, which help to cut into a product. One has to be careful while using: the cutting edge and the point of the knife are not covered with any softer protective layer, which make it more prone to damage.

The knives are provided with a classic Japanese octave handle, the WA handle, made of rosewood.

Shiba delivers his knives to the specialists all over the world and doesn't stop with designing: recently the gyuto Type III was added to the collection. It's less extreem in design, which makes it more recognised as a classic gyuto. This serie has the same structure, but the core is made of aogami super carbon steel. This steel is proved to be extremely sharp, but also with sharpness that stays. This in combination with a beautifully thinly ground blade gives the knife an unbeatable ease of cutting.